Brazil and Croatia face off live on Thursday (12) in the Arena Corinthians, Sao Paulo at 17:00 on valid by the opening of the FIFA World Cup in Brazil 2014 match.

For the second time in the history of the World Cup Brazil will host this, which is the biggest sporting event involving teams of each country, the first time was in 1950 and we all remember or know the history of the Cup, the famous Maracanazo when Brazil was defeated by Uruguay in the final, with audience of almost 200,000 viewers.

But this time, it seems the story will be different, Brazil remains the favorite, is much more prepared, besides having many superstars, players of international renown, who act in the best clubs in the world.

The opening match of the World Cup will be against Croatia, an old acquaintance of the Brazilian team in the 2006 World Cup in Germany, Brazil also faced the Croatian debut and won by 1-0.

Croatia will be without their main player, Mandžukić, the striker was sent off in the last match of the European qualifiers and will have to meet this match suspension, as the Brazilian team, has no problem with any player. Including Neymar, who is the captain of the Brazilian team, flying in this field, the player warrants that at its best.

The coach Scolari is very happy with the new family formed, makes his criticisms usual, but wants to be champion as well as in 2002, when he commanded the Brazilian national team for the first time. 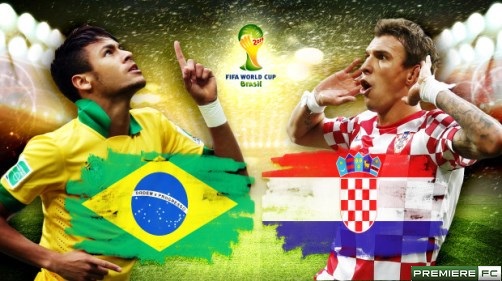 The match between Brazil and Croatia will be broadcasted live by Globo TV throughout Brazil and the Premiere channel for worldwide, the GloboEsporte.com site tracks in real time with videos of the goals and best moments of the match.